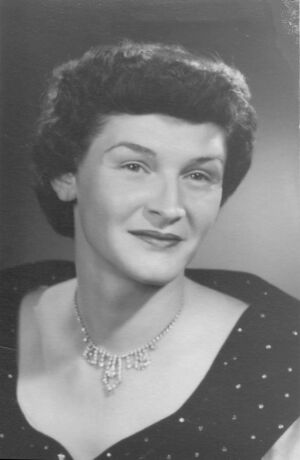 Barbara was born January 15, 1926 in Bellingham, Washington to Briggs and Katherine Burpee.  Her early childhood was spent on nearby Orcas Island where she developed a lifelong connection to the ocean and it's beaches.  Her family later moved to Roseburg, Oregon where she attended school.  She left for a few years during which time she worked for Montgomery Ward in Oakland, California.  She returned to Roseburg in 1946 where she worked as a telephone operator.  It was there she was reacquainted with a childhood friend and wed Roy Albertus on May 26,1949.  They were married for 71 years and were friends for 84 years.  They settled in Coquille, a small town near the coast.

During the years spent in Coquille, she reared six children and helped to build a home.  She planted vegetable gardens, berries, raised chickens and pigs to help feed a growing family.  She became a 4-H leader and was instrumental in growing the forestry program.  She liked going to the beach with her family to search for glass balls that swept in during storms and to comb for seashells and agates.

In 1960, Roy's work took her and the family to Kalispell, Montana.  She helped build a new home and grew other bountiful gardens that fed many in the area and that gave her great pleasure.  Again, she became active in the 4-H community.  She was a leader for twenty-three years including her service in Oregon.  As her children matured, her interests and involvement with the community also grew.  She volunteered with the Red Cross, read to residents at what was then called the County Home, donated time at Fairmont-Egan school and performed in plays at the community college.  She was a congregant of the Episcopal church for many years.

She and Roy moved to Panama in 1973 for four years.  It was an experience that expanded her worldview and demonstrated her resilience and tenacity.  She learned Spanish and supported him during this new cultural work venture.  It brought about a lifelong love for travel and adventure.  She continued to accompany Roy on work projects for the next twenty-five years living in Kentucky, upstate New York and the Michigan peninsula.  She and Roy continued to travel after his retirement and often vacationed with family.

She was a woman of many dimensions.  She loved to dance and to play cards.  She took great joy in helping others.  She saw beauty in everyone and everything.  She read her Bible daily wherein she derived a great spiritual calm and comfort.  Her infectious laugh and quiet smile will remain with us forever.

As per her wishes, there will be no memorial service.  Rather than mourn her passing she would want people to celebrate her life.

The family wishes to thank Home Options hospice for their care and support during her final days.  They also thank Buffalo Hill Funeral Home and Crematory for their courtesy and kindness. Friends are encouraged to visit our website at www.buffalohillfh.com to leave notes of condolences for the family. Buffalo Hill Funeral Home and Crematory caring for the family.

To send flowers to the family or plant a tree in memory of Barbara Louise Albertus, please visit our floral store.

You can still show your support by sending flowers directly to the family, or by planting a memorial tree in the memory of Barbara Louise Albertus
Share a memory
© 2021 Buffalo Hill Funeral Home & Crematory. All Rights Reserved. Funeral Home website by CFS & TA | Terms of Use | Privacy Policy